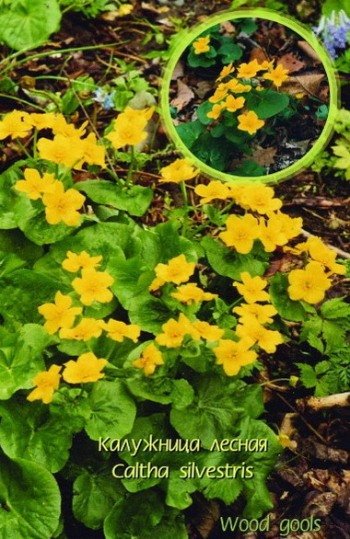 In XIX century and the first half of the XX century the wood gools, growing in the Far East, was considered to be identical to the European species cowslip ( Caltha palustris L.), and it is only in 1961 that V.N. Woroshilow established the Far East plants to be a separate species – wood gools. Probably, it is one of the spring plants most familiar to the people in the Primorsky Territory. As early as the beginning of spring the glossy brownish-green leaves of the gools furled into a sharp cone are very conspicuous on the last year's yellow grass. A bit later it pleases us with bright glossy yellow flowers. This perennial grows in wet places, sometimes by the water. It occurs in woods and waterlogged meadows. The plant is up to 40 (60) cm high, with a short rhizome and a bunch of cord-like roots. One of the distinctive features of this species is tuff and long (10-15 cm long) black fibrous remains of the leaf petioles at the basis of the stem. Radical leaves on long petioles, leaf blade orbicular-kidney-shaped, kidney-shaped or orbicular, up to 15 cm in diameter in the beginning of flowering, later the leaves enlarge to 18 cm in diameter: glossy, with dentate or undulate edge. The leaves located higher on the stem gradually become sessile so that the upper leaf blades do not shade the bottom ones. Stems are erect, weakly costate, with multifloral (up to 15 flowers) lax inflorescences. It flowers from the beginning of May till the beginning of June. Flowers are up to 4 cm in diameter, possess a single perianth of 5-7 broad-elliptic yellow sepals. Stamens are numerous, with yellow anthers producing a lot of pollen, pistils are 5-8. Fruits open from one (internal) side, and then smooth glossy, almost black seeds capable of floating on water are gradually scattered out of them. Like almost all the members of the buttercup family the gools, is poisonous when fresh.

Propagation: division of the rhizome, seeds. Well develops on a fertile soil.

Distribution in the RFE: the Primorsky Territory.

General distribution: China, the northern part of the Korean peninsula.

It is used in decoration of shallow artificial reservoirs, or a coastal area of reservoirs. Medicinal herb (Фруентов, 1974; Шретер, 1975).